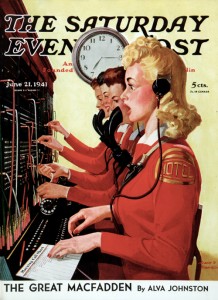 Looks like a veritable phalanx of operators. Switchboard type…

Science-Fiction Author Brad Torgersen (who’s also an Army reserve warrant officer) mused on this, way back in the Permian Period (ok, way back in mid-March, but we just read the post).

The root question is: who gets to be an “Operator?”

Explanation: for those who don’t walk in U.S. military circles, the word “Operator” seems to be one of those internal U.S. military phrases that migrated from a very specific sector of the U.S. military, out into the popular American culture via technothriller fiction and video games, then back into the U.S. military as a whole. Its general usage now connotes “pointy end” experience and/or skillsets. Ergo, the “Operator” goes where the shooting happens, to do some shooting himself.

Sounds pretty straightforward, right? Only, no, because this is not an MOS nor is it a skill badge. It’s a slang title being adopted (both officially and unofficially) by an increasing number of people who are all too eager (to my eyes) for the credibility they believe this word will lend them — even if they may not precisely be a “pointy end” person by trade.

In other words, “Operator” has become one of those familiar U.S. military butt-sniff words used by people to distinguish “real” military personnel from “POGs” — the latter being the post-9/11 variant of REMF, which was a Vietnam-era acronym for rear-echelon mother fucker; someone decidedly not on the “pointy end” of things. General infantry are using the word “Operator” now. As are F-16 pilots, did you know that? MPs and Combat Engineers? Explosives Ordnance Disposal? Armor too? And so on, and so forth….

We tried to post a comment on his blog, but as our email address was used years ago to set up a long-defunct WordPress.com account, we can’t do it. That’s retarded, but that’s WordPress for you. Or maybe it’s our level of tech savvy.  Anyway, here is the comment we meant to leave on Brad’s blog, edited into a post suitable for this blog.

We can shed some light on the genesis of the term, “operator.” It was an old (as in 1960s old, maybe 1950s old) term of approbation in Special Forces for a guy who was skilled in clandestine warfare. Clandestine means something specific in special operations: it means operations that happen and leave no sign they ever occurred, with the enemy none the wiser. This is characteristic of underground and spy operations, and Special Forces’ involvement in these operations was inspired by OSS and SOE operations in WWII. Preparation for such a behind-the-lines and even stay-behind war was a constant throughout the Cold War.

This is what Detachment A, Berlin Brigade (a real unit that was classified for years) did. So, in this usage of the word, which was very old and restricted to very old colonels and sergeants in our SF spratling days, meant a guy who had tradecraft and not just fieldcraft. Rangers have good fieldcraft (or had then, anyway). SEALs had okay fieldcraft then, and got a lot better at it later. But tradecraft was the milieu of the spooks and of Special Forces. Still is.

When a special-purpose special operations unit was stood up in the late 1970s, with a view to a worldwide counterterrorist mission, it did not have any special badges. But after a candidate passed selection and assessment, he was then brought up to speed in what was called the Operator Training Course. We believe but are not positive that we know who was the vector for the term getting a new lease on life. (It wasn’t the unit commander, we think, but the intelligence officer, originally a warrant officer and later commissioned).

Completing OTC does give a man a small mark on his full-length Military Occupational Specialty (MOS) code. But the word “operator” has fallen into disuse there (and in similar units), so we’re told. The fate of all euphemisms is to be inflated into meaninglessness, and when anybody can print sheets of new “operators” it was inevitable. But officially, around the time we retired these men were still the only Operators in the US Army whose Operator-tude isn’t tied to a specific piece of equipment like a road grader.

The Marine term for a fully-qualified MARSOC Marine is Critical Skills Operator.

We’re not those kinds of O-fficial “Operators”, just a retired 18 Series, although back in the 70s through the oughts we aspired to be the kind of can-pick-a-lock-and-service-a-dead-drop small-o “operators.”

And we find Brad’s diminution of his military significance unnecessary. As the Truths tell us,  “SOF Operations generally require extensive non-SOF support.” So the guys who replaced us appreciate the fact that guys like Torgerson are there. (Maybe not all the young ones, but they’ll learn. We did).

Didn’t operator get popular when we needed a term for all the special-operations folks — soldiers, SEALS, Marines, CIA — performing all the cool operations in the recent wars?

It really came from what that one SOF unit called its guys, which really came from the depths of SF culture. Just like “Hooah,” in about 1982, didn’t exist anywhere except at the two (then) Ranger battalions.

During my time as a navy Gas Turbine Technician on a guided missile destroyed, one of my qualifications was as an electrical switchboard OPERATOR (and much to my disappointment, did not receive ANY firearms qualifications, either!) I guess my point would be that “operator” is establishing itself into the lexicon in much the same way that “tactical” has done as well?

Well, I think both have passed their sell-by date, but my best local FFL has “tactical” in his company name, and I saw a magazine on the newsstand called, I am not making this up, “tactical operator” for the twofer. Now, some of the local cops call themselves “operators” when they ninja-suit up to serve warrants. (Not that I’m against cops wearing the best protective gear possible when serving warrants on violent people. They just have to keep sight of the fact that they’re there to arrest a specific person or persons, not to lay waste to the grid square).

Yeah Man, If you ever get some one else (not yourself) to call you a “Tactical Operator” you will KNOW you have “Arrived”!

According to Charlie Beckwith the term was created to refer to Delta members, most of whom were NCOs, and therefore, not “agents” of the Federal Government as commissioned officers are.

State Dept. BS? Maybe, but the term stuck, and we are stuck with it.

The streams have crossed.

Back in the day, on You Bet Your Life, Groucho Marx noted that one female contestant admitted to having borne 9 children. When he innocently asked what her husband did, she replied. “He operates an automatic screwing machine.” Marx looked deadpan ahead without a comment to avoid the censors, while the entire house came down in laughter. Ah, the Fabulous Fifties.

And now we’ve reached the point that most of the tacticool operators serving warrants operate an automatic screwing machine too. Sadly, we’re all the victims.

It’s not nearly as funny now, but it’s true.

I was under the impression that”operators” “operate” during ,in or on “missions” as a part of “special forces”.
Special in the sense that they are NOT regular army,navy,marine units. Special in the sense that they go through tougher longer more intense training in the art/science of being a ground based warrior. The Navy Seals, seems to me, do it all. I’m probably wrong in that assumption. Pilots on the other hand have thier own specialty………

In the late 90s, the term was being used to distinguish between the intel and ops sides of the Navy – the 2 vs the 3, so to speak. I recall a very pretty but exasperated intel LCDR complaining about “you operators!”, referring to a bunch of ship drivers and pilots.