In Bulgaria… archaeologists are exhuming centuries old… dead vampires? Well, they’re people that someone thought were vampires… judging from their burial with a stake in the heart.

Let’s go back to a forgotten era, before vampires became sparkly, and stepped into the role once played by horses in tween girls’ fantasies; let’s go back even before that, to a time before Bram Stoker wrote Dracula and set the whole “Vampire” thing moving. Apparently, about 900 years ago villagers really believed this stuff, and staked some of the dead through their congealing hearts, like this feeling-no-pain character. The disc about where his ticker used-to-was is the butt end of an iron stake: 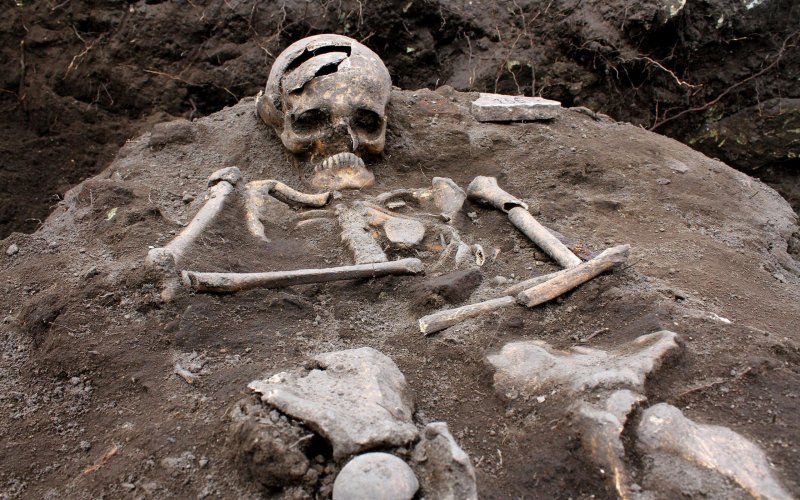 Smithsonian magazine has an entertaining article on him:

Clearly, this man’s neighbors did not trust his remains to stay put. As Nikolai Ovcharov, the archeologist in charge of the dig, told the Telegraph: “We have no doubts that once again we’re seeing an anti-vampire ritual being carried out.” At the time of the man’s death, vampires were perceived as a real threat in many Eastern European communities. People who died unusually—from suicide, for example—were sometimes staked to prevent them from coming back from the dead, the Telegraph writes.

Iron stakes and hokey religions are a pretty poor substitute for a blaster by your side, kid.

Of course, we learned of this from a typical Beastweek story, written by a professional, J-School-certified journalist, that passed through “layers and layers of editors,” that concludes (emphasis ours):

Little could the New England community ever imagine that 200 years later, vampires would be taking over the entire country—but this time on the silver screen—and that their ancestors would be swarming to get a look at these sultry modern counterparts.

Please explain your meaning of the word, “ancestors.” You appear to require its antonym.

Silly English language, it has another word for everything.

Anyway, we’ll be thinking of Old Spike tonight as we hand out candy to little vampires, etc. Our neighbors up the street put on a fantastic display of inflatable decorations — giant ghouls and devil dogs and whatnot. That brings all the kids from all over the place, and some of their parents come, apologizing. Why apologize? It’s a harmless costume holiday, and in a community  where a median home is around a half-million, nobody needs to whine about buying some extra Reese’s Pieces or what have you. (We tend to buy candy that we don’t like our ownselves… in the event of leftovers we’re less tempted to scarf it all up).

10 thoughts on “Weapon for Vampires? A stake in the heart is traditional”

Harmless costume holiday (Holy Day?)) Sorry, must differ on that one. But I won’t elaborate unless pressed.

The room temp guy in the pic…his skull appears to smashed, is that a normal thing to expect of a subterranean deceased person or did his former neighbours also belabour his head in addition to spiking him through the heart? Not very knowledgable about religious rituals of the eastern European sort, though I do know enough doctrine to be allowed serious doubts about most of the folks claiming to be Christian, and being persecuted as such, out of any of those places where once the original disciples walked and talked. And even more, the ones from where we come from; did not The Lord Himself say so when He asked the perhaps not so rhetorical question about whether there’d be any faith left when He returned?

Kim Newman wrote a series of books and short stories based on the premise that the events of Bram Stoker’s book were real, but that Van Helsing and company failed. The stories are filled with characters borrowed from various fictional works intermingled with historical figures. Vlad aims higher after claiming Mina Harker, and ends up as the Prince Consort to Queen Victoria. Vampires from around the globe then come out hiding to take over much of European high society, who then make as much of a hash of things as their warm counterparts did in real life.

The second book “The Bloody Red Baron” features the War to End All Wars fought by the living and the undead. European treasuries are depleted by the need to issue silver bullets for their Maxim guns. Baron von Richthofen’s Flying Circus is manned by vampires taking to the air as giant bats. The third book and a couple of short stories feature a certain British secret agent with a Licence to Kill. His shifting physical appearance and near immortality is thanks to vampirism. One of the short stories is based on the 1980 Princes Gate embassy takedown in which the Iranians are replaced by Transylvanians, and another involves the fall of the Ceaușescu regime. A separate short story revolves around the tortured filming of “Apocalypse Now,” but the source materiel is now a mash-up of Conrad’s “Heart of Darkness” and Stoker’s “Dracula.”

Obviously still dead. Therefore, based on this 900 year old experiment, it can be concluded that an iron stake through the heart is an effective means of prohibiting the reanimation of a vampire. But dare they remove it?

“You appear to require its anyonym.”

Nothing worse than a spelling error in a journalism rant 🙂

(at least, my dictionary doesn’t have ‘anyonym’. I’m guessing you wanted antonym.)

(Sorry, the devil made me do it)

He who picks nits lives in a glass house, or something like that. Thanks, and the correction has been made.

Traditionally, the fey and the unholy could not abide cold iron.

Sure, the Soviets *claimed* they made so much sintered-iron-core small arms ammo because lead could be better used elsewhere…

I’ve been waiting for Larry C. to come up with that one on his own; I might have to whack him with the cluebat.

I wondered whether the stake business was an attempt at poetic license from Vlad the Impaler. Though he is reported to have used the stakes in a slightly different manner. Perhaps a little truth was blended with fiction?

Are you sure blasters are certified to keep blood suckers down? Sucks to put a burn hole through someone only for him to get up behind you!

What’s really interesting is the number of cultures than have vampire stories. I think it is universal! The Europeans have their vampires, the Chinese have their xiang shi, the Malays have their pontianak, the Indians have their brahmarak. Seems a bit scary that so many cultures all have something so similar.