In the history of firearms, one of the obscure yesterday’s “weapons of tomorrow” whose morrow never dawned was the Dardick “tround” (triangular round) system. The idea was for the weapon to use special trounds, or tround adapters that took a round of conventional fixed ammunition — .38 Special, for the standard Dardick, although an attempt was made at a .50 Dardick gun for aircraft usage. There was also a triplex tround. The ammunition’s unusual sectional shape made it easy, at least in theory, to design feeding mechanisms.

Dardick never successfully commercialized his product, instead surviving for some years on R&D money from the military.

A seller at GunBroker has not one, but two, of these for sale in a single auction: a Model 1500, the most common Dardick (although “common” in Dardick terms means there may have been three dozen made), and a rarer Model 1100. I don’t think it gets much more obscure than this! Up for auction are my two Dardick pistols and small collection of Trounds, pamphlets, etc. Both are original and complete.

The more scarce of these two is the Model 1100. It is said that only 40-50 firearms total were ever produced by the Dardick Corporation and only a small handful of those were the Model 1100, one of which was presented to JFK by David Dardick. This 1100 has not been test fired with live ammo but functions/cycles flawlessly in both double and single action. 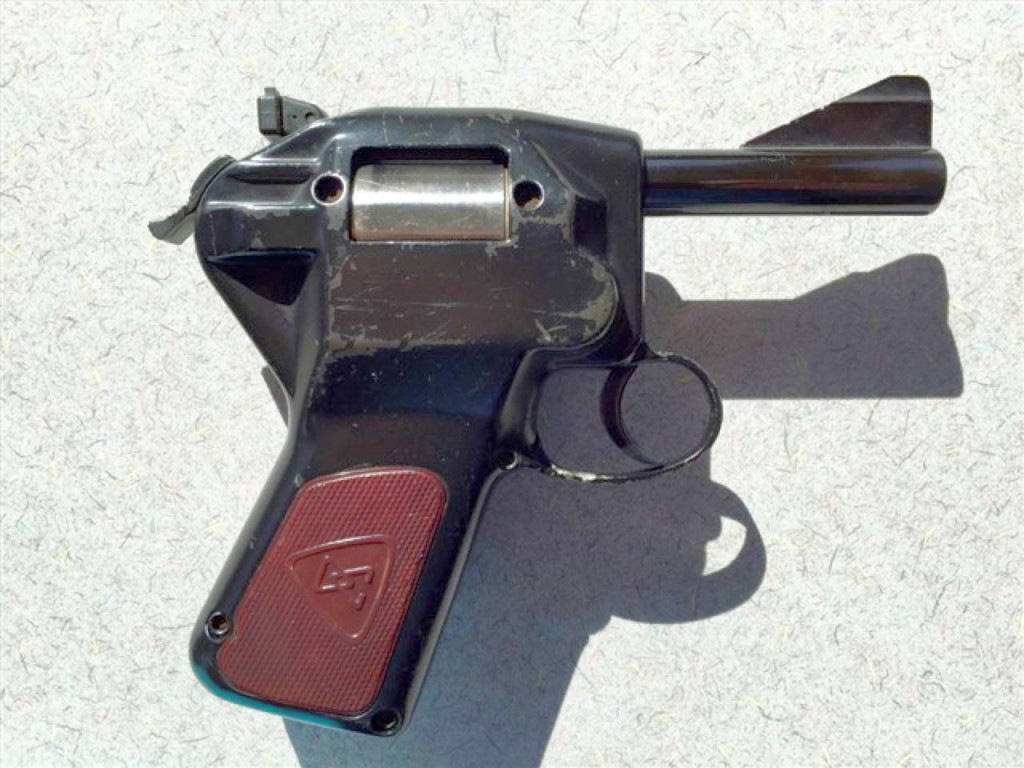 The Model 1500 is complete but will need some work to get it running smoothly. As it sits, the cylinder and other components rub on the frame and do not rotate/cycle without assistance. Both pistols have the complete adjustable sights and fully functional firing pin selector/adjustment features in-tact. These pistols have NOT been refinished and the factory etched/white information is clear and not painted over on the barrel and receiver of each.

Included in the collection are a selection of several live Trounds (one .38 HiVAP, Two Well Busters, a .50 caliber and a standard Tround with what appears to be a smaller projectile than the usual .38 projectile, possibly a .32?). Also included are an original box for the Model 1500 and several original/old stock pamphlets and booklets.

via Dardick 1100 and 1500 Pistols : Other Collectible Guns at GunBroker.com. The initial bid requested on the auction is $5,000. There are two ways of looking at this. It’s a lot of money for a couple of guns you’ll likely never have ammo to fire, that’s one way. And then there’s the other way: two guns from a remarkable dead-end lineage of firearms history, guns which personify 1960s Space Age firearms design, for about the price of one relatively common WWII rarity like a Johnson or a modern replica like Ohio Arms Works BAR.

Only you know if it’s worth $5k to you. We regret we can’t buy every firearm we feature in these pages. (Hmmm… how long till we qualify for a reverse mortage, we could monetize the Manor….?)

Good God. I’m flabbergasted. Well, for Thanksgiving week, I guess I can only say, Huzzah! 🙂

I always thought it would be an interesting thing to couple the Dardick Tround idea with the helical magazine of the Calico guns, using the caseless technology from the HK G11. You’d likely need to have a revolution or two in materials technology, but I figure that mating all three of these technologies into a service rifle would be… Interesting. The Tround concept sure as hell would have been simpler than that cuckoo-clock insanity that HK did try to implement in the G11. Solve the materials problems that allow for gas erosion at the sealing surfaces, and hey, presto!, we’ve got a potential winner.

Just think what Mr. Dardick could have come up with if he’d had cad and a printer…..

Love those old timey pamphlets!
No slick marketing there

I remember those from “Mack Bolan” or “Marc Dean- Mercenary” and I had seen pics of the guns but that is the best pic of the trounds I recall seeing.

Materials have come a long way, I’m kinda suprized nobody has milked uncle out of a bilion or two to resurrect the concept-the F-35 sure could use a cutting edge cannon…