OK, here’s a new video on printing and assembling the Bolt lower, a bolt-together AR lower.

We’ve featured the Bolt many times before (including links to its files) but this is a new video. The names involved (Ma Deuce, RollaTroll, FOSSCAD, FP [Freedom Print]) should be familiar to everyone.

The Bolt looks like it easily would be modified for assembly with rivets, if you don’t like the idea of parts unscrewing themselves. Several mods of the Bolt already exist, like one by Warfairy adopting the profile of the Vanguard lower, and dispensing with any provision for a safety.

Homemade Charger How To

If 22 is your thing, here’s an Instructable (!) on doing a pistol based on the Ruger Charger design. The creator is another old familiar name, Buck Ofama. Sounds vaguely foreign; do you think that’s his real name?

Can’t go the mile if you ain’t got that file.

Some New Stuff — no Files yet

Ambi mag release for the Glock-mag Gluty pistol, based on Glock and AR parts. Treillage (sp?) competition stock from Warfairy — gives lots of adjustments on a regular carbine receiver extension. How it looks on the gun: 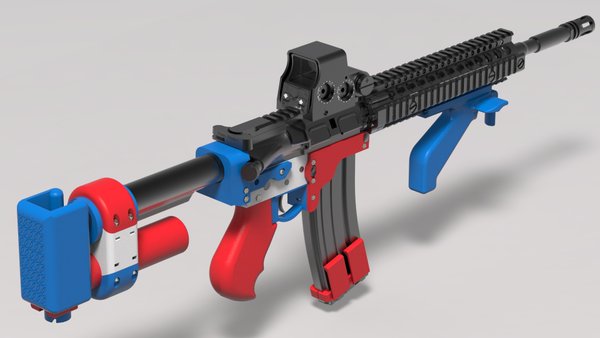 How the parts break down, color coded: Bear in mind that anything that’s still just a rendering, puts you on the bleeding edge of the tech when you go to print and use it. But for some of us, that’s half the fun!

New Videos from Guy in a Garage

Here, he takes the Vanguard to the range — 300 Blackout with his homemade suppressor. (He blanks out his suppressor markings for privacy. Not that “they” don’t know, as it’s a registered receiver). After firing 60 rounds at the range, he analyzes the condition and performance of his lower.

Want to make your own suppressor like he did? Here he covers the regulatory issues.

He has printed at least three different AR lowers. Here he preps and assembles a Phobos, in ABS:

Here he preps and assembles a Charon, again in ABS:

Important note, he previously printed an early model and it was “off” dimensionally — this one is the 4.0 version.

And here’s a range safety bolt/chamber block for the AR. If printed in nylon, these would be oxen strong and easily dyed orange…. unfortunately we don’t know if he has released the files.

Some of these accessories are cooler than entire 3D Printed guns.

Reloaders swear by the $70 Little Crow Gunworks’ WFT — World’s Finest Trimmer. The WFT2 version lets you use the same trimmer for multiple calibers with a $30 interchangeable insert (instead of a whole second trimmer). So Guy in a Garage printed his own insert for the WFT2 for .300 Blackout. This video shows it and tests it out.

Is this the first Registered 3d Printed Firearm?

Michigan has some weird laws. (Every state has a few). So the guy who made this Washbear is arguably the first manufacturer of a registered 3D Printed firearm, unless some poor wretch in the People’s Republic of Massachusetts, the Cosanostrian Emirate of Cuomostan, the Alternative State of California, or some other dystopia has done so already. The cylinder has lined chambers, and is printed of Taulman 618. If you look closely, the pistol unlike the standard Washbear, has a frame made in two parts and joined by screws (and glue). That’s because this builder’s printer wasn’t big enough to print the whole Washbear frame in one shot.

The whole Imgur thread is worth reading in depth, as almost every picture has an informative caption. Enjoy!

How about some Tech on Carbon Fiber filament

Is “carbon fiber” and other exotic filament for normal FFF printers really that much stronger? Joe Binka, Lead Design Engineer for large-format-printer maker 3D Platform, wanted to know, so he did a very engineer thing and, making a test coupon and testing the coupons to failure, evaluated all the extra-strength filaments he could get his mitts on. (3D Platform’s printers use the same FFF technology as all open-source FFF printers, and can use all the same materials). The results were a little surprising.

In this color map, redder is better and greener is worser. Joe discovered that while polycarbonate was the strongest, it was such a pain in the neck that he recommended the runner-up, PC ABS, instead. Polycarbonate…

is a pain to print with. It warps and curls really bad and I would rather avoid it if possible.

…. If I need a really strong material, I’m going to go with the PC-ABS over the carbon materials. It’s just much easier to deal with.

Joe has promised to add new materials to the chart, as they crop up.

It’s made for personal use so it does not require a serial number but seeing as the bolt together lower is composed of several pieces that are not permanently attached to each other, I wonder which sub-piece would be considered the ‘firearm’ and potentially need to be serialized.

That is a really good question, Matt!

I think you’d have to actually ask Firearms Technology Branch, and they might just take the alternative of telling you it’s the upper, as with an FN-SCAR.

Well that would be a headache and a half, wouldn’t it. The laws weren’t designed with non traditional manufacturing methods in mind and it shows. Of course, the golden era of gun regulation is gone so I don’t see any laws which address this at the federal level happening anytime soon. The real issue would be the atf’s power to ‘determine’ almost whatever it wants when it comes to things like this. On an unrelated note, I wonder how long it’ll be before access to a 3D printer and the internet will be considered intent. Oh constructive possession, what would we do without your limitless ability to make up crimes where none exist

I have to say, what I’m hearing from feds is that when other agencies bringing open and shut felon-in-possession cases to ATF, the Bureau does not have time to pursue “small” cases like that. They say that because when they bring a case like that to the AUSA, all tied up in a neat bow, the case frequently will not be prosecuted: too “small” to be worth the time.

Can you point to any constructive possession cases recently? While it’s still on the books as a matter of caselaw, it seems as a practical matter it’s a legal dead letter.

We’ve seen what happens if you put guys in prison for 10 or 15 years for felon in possession, plus their drug stuff: the president commutes their sentences, because they’re not “violent” criminals.

I get what you’re saying. I don’t mean to come off so dour. It’s just that laws like constructive possession are so broad as to be susceptible to abuse. It may not be an issue now but students of human behavior know that if something can be abused/gamed it is more a matter of when, not if.

Revolutions in tech add to our already interesting times.

Great article, and it covers failures of vision and technology alike. I know I lined them out for good when they went hard anti-gun before the Stratasys acquisition. (Stratasys is also organizationally committed to anti-gun politics, as is MarkForged and perhaps other 3DP companies).

Sucks for the New York engineers and makers out of work.

Any recommendations on a 3D printer? With the Ghostgunner on the way (this quarter supposedly) I would like to pick up a nice printer for making jigs. I think it is Mattel that is coming out with a new 3D printer that is supposed to be like $300, so that would be easy on the pocketbook. I checked, and it will accept standard programs, so you’re not just stuck making Army Men, but I might make a couple just for old-times sake as I’m sure my firecrackers and lady-fingers in my youth destroyed a Division’s worth! Any other options out there that people have worked with?

“Did you know 2016 is the Year of Building Your Own Gun? It is. Get to it!”
Well OK, but I’m severely out of date here. I was a ‘gun nut’ 35 years ago, thereabout. Had an RCBS Junior reloader and the requisite dies for my guns. Had certain loads and velocities memorized from a Speer (?) manual. I think it’s in the book “Drawing On the Right Side of the Brain” that the author says the reason why most adults draw so lousy is that their ability now coincides exactly with the age that they stopped drawing in their youth. So it is, I know zip about this modular gun business.
I’m guessing that this ‘lower’ you refer to is just a housing that holds traditional metal parts ( hammer, springs, sear, etc)? Does one select different components from different sources, or like ring and pinion gears, do they need to be a set? This stuff ordered online?
If these noob questions are annoying, do you have a link to an introductory site? Thanks.

Hmm, I wonder – airguns, even of similar power levels should have less wear on material than firearms?

With those big, light carbon fiber high pressure air-tanks for paintball, I imagine it’d be possible to build pretty sweet guns. If the Girardoni airguns could manage 30 shots, I imagine 90 should be doable with one of these..